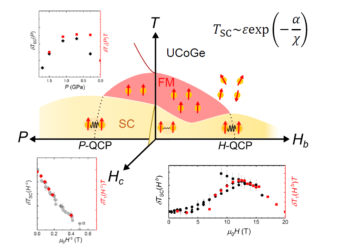 The mechanism of unconventional superconductivity, such as high-temperature-cuprate, Fe-based, and heavy-fermion superconductors, has been studied as a central issue in condensed-matter physics. Spin fluctuations, instead of phonons, are considered to be responsible for the formation of Cooper pairs, and many efforts have been made to confirm this mechanism experimentally. Although a qualitative consensus seems to have been obtained, experimental confirmation has not yet been achieved. This is owing to a lack of the quantitative comparison between theory and experiments. Here, we show a semiquantitative comparison between the superconducting-transition temperature (TSC) and spin fluctuations derived from the NMR experiment on the ferromagnetic (FM) superconductor UCoGe in which the FM fluctuations and superconductivity are tunable by external fields. The enhancement and abrupt suppression of TSC by applied fields, as well as the pressure variation of TSC around the FM criticality are well understood by the change in the FM fluctuations on the basis of the single-band spin-triplet theoretical formalism. The present comparisons strongly support the theoretical formalism of spin-fluctuation-mediated superconductivity, particularly in UCoGe.