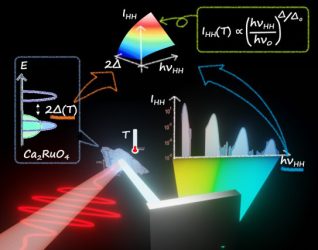 In the Mott insulator Ca2RuO4, which is a strongly correlated material material, we observed for the first time the generation of high-order harmonics that convert a strong infrared laser beam into visible light. Our experiments show that the intensity of the generated signal follows a surprisingly simple rule.

Surprisingly, the harmonic signal increased sharply as the material was cooled. This effect has never been observed in any material and has never been theoretically predicted. In addition, we found that this effect follows a surprisingly simple law (upper right in the figure) for insulator gap energy and harmonic photon energy that are opened by electron correlation. This is an example of how complex physical phenomena show a simple and beautiful law, and our research group believes that a new harmonic generation mechanism derived from electron correlation is involved in this law.

This result will help elucidate the non-equilibrium dynamics in strongly correlated materials. It also suggests the possibility of providing new design guidelines for nonlinear optical materials used in laser pointers and optical modulators that are familiar to us in our daily lives.

The results of this research were published online in the international academic journal “Physical Review Letters” on March 23, 2022.

Competition and cooperation among orders is at the heart of many-body physics in strongly correlated materials and leads to their rich physical properties. It is crucial to investigate what impact many-body physics has on extreme nonlinear optical phenomena, with the possibility of controlling material properties by light. However, the effect of competing orders and electron-electron correlations on highly nonlinear optical phenomena has not yet been experimentally clarified. Here, we investigated high-order harmonic generation from the Mott-insulating phase of Ca2RuO4. Changing the gap energy in Ca2RuO4 as a function of temperature, we observed a strong enhancement of high order harmonic generation at 50 K, increasing up to several hundred times compared to room temperature. We discovered that this enhancement can be well reproduced by an empirical scaling law that depends only on the material gap energy and photon emission energy. Such a scaling law can hardly be explained by the electronic structure change in the single particle model and has not been predicted by previous theoretical studies on HHG in the simple Mott-Hubbard model. Our results suggest that the highly nonlinear optical response of strongly correlated materials is influenced by competition among the multiple degrees of freedom and electron-electron correlations.