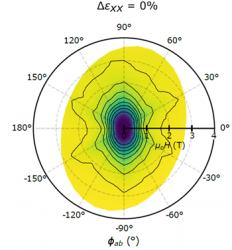 In consumer liquid-crystal displays, “nematic” liquid-crystals, in which bar-shaped molecules align along a certain direction, are utilized. Configuration of this molecular alignment can be controlled by an applied voltage, to change the light transparency of each pixel. Recently, “nematic superconductivity”, which is analogous to nematic liquid-crystals, has been discovered. Superconductivity, the phenomenon characterized by the total disappearance of electrical resistivity, is caused by quantum-mechanical binding of two conduction electrons, resulting in formation of electron pairs. In nematic superconductors, the electron pairs align by themselves in a way that the binding strength becomes strong along a certain direction.

Therefore, an interesting question arises: is it possible to control and utilize these aligned electron pairs? We succeeded in controlling the alignment configuration of the nematic electron pairs by squeezing a nematic superconductor along one direction. More concretely, by applying and releasing compression to a crystal of the bismuth-selenium-based superconductor, multiple regions (domains) of different electron pair alignment were repeatably changed between a single-domain and multi-domain state. Such control of superconductivity via its domain structure has never been achieved in the over-100-year history of the research of superconductivity. It is expected that this work can trigger wide research developments that can be termed as “superconducting domain engineering”.

In modern liquid-crystal displays (LCDs), nematic liquid-crystals, in which bar-shaped molecules align along a certain direction while keeping fluidity, is used. The direction of the molecular alignment can be controlled by an applied voltage. Across a larger length scale, the alignment direction can vary gradually, and overall the liquid-crystals can form various alignment configurations. In each pixel of an ordinary LCD, a twisting structure of the molecular alignment is realized. By an applied voltage, such twisting is released, and the light transmission is varied. In this way, control of large-scale alignment configuration enables the display of videos or photos.

Then, it is an interesting question whether the nematic superconductivity, and particularly its domain structures, have controllability like that of nematic liquid-crystals. Since superconductors have no resistivity, voltage cannot be applied and hence voltage control is hopeless. Instead, it has been theoretically suggested that lattice deformation (strain) can affect nematic superconductivity. However, this prediction needs verifications based on experiments. Moreover, the strain effect to a multi-domain situation has not been considered at all, and hence requires experimental clarifications.

In this project, we studied external-strain control of nematic superconductivity. Single-crystalline samples of SrxBi2Se3 (x is the doping amount of Sr; in this work, x is estimated to be 0.06), grown by Prof. Yoichi Ando’s group in Univ. of Cologne, Germany, was mounted onto a strain-application apparatus, which utilizes the piezo-electric devices. The anisotropy in the binding strength of nematic electron pairs has been investigated via the anisotropy of the upper critical field, the field that is required to break superconductivity. For a single-domain nematic superconductor, a two-fold anisotropic behavior in the angular dependence of the upper critical field is expected. In contrast, for a multi-domain sample, more complicated patterns resulting from the combination of multiple two-fold behaviors are expected. The important feature of this multi-domain behavior is that peaks in the upper critical field can be observed in the interval of 60 degrees, each peak reflecting the nematic-pair alignment.

We succeeded in controlling nematic superconductivity, in particular its domain configuration, by using externally applied strain. As shown in the figure below, we revealed that the upper critical field, the magnetic field required to suppress superconductivity, exhibits complicated multi-peak pattern as a function of field angle under zero external strain, but it exhibit a simple two-fold structure when the sample is compressed by about 1%. The former agrees with an expectation for multi-domain situation, and the latter for single-domain situation. Moreover, these two domain configurations can be repeatably changed back and forth by releasing and applying the strain.

Domains are known to be realized in ferromagnets, such as iron. By changing the domain structure, the magnetic behavior of, for example, an iron nail, can be largely altered. Thus, domain control is fundamentally important for technological utilization of ferromagnets. More recently, the microscopic utilization of magnetic domains, domain engineering, has been widely tested, and several technologies such as racetrack memory are getting closer to consumer use.

In the present work, the theoretically predicted control of the domains of nematic superconductivity by external strain has been experimentally confirmed for the first time. Such control of superconducting properties via domain configuration has not been reported during the long history of research in superconductivity. This discovery may trigger new research developments that can be termed as “superconducting domain engineering” in both basic and applied sciences.