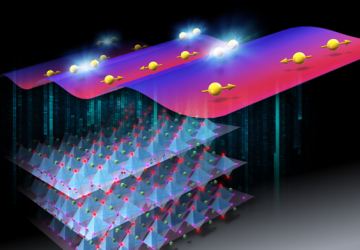 Translational symmetry breaking in fluid is antagonistic but can be realized in
superconductivity, which is quantum-mechanical coherent fluid formed by
electron pairs. This novel superconducting state, known as the Fulde-Ferrell-
Larkin-Ovchinnikov (FFLO) state, can be induced by time-reversal-symmetry
breaking magnetic field applied to spin-singlet superconductors. This state
intrinsically causes the superconducting spin smecticity, spin-density-modulated
fluidity with spontaneous translational-symmetry breaking. Detection of such
spin smecticity provides indisputable evidence for the FFLO state but its
observation has been quite challenging. Here, we report the characteristic
“double-horn” nuclear-magnetic-resonance spectrum in the layered
superconductor Sr2RuO4 near its upper critical field, indicating the spatial
sinusoidal modulation of spin density, namely the superconducting spin
smecticity. Our work reveals that Sr2RuO4 is an ideal compound for studying
the FFLO physics.
These findings are published in 22nd Apr. 2022 in Science.