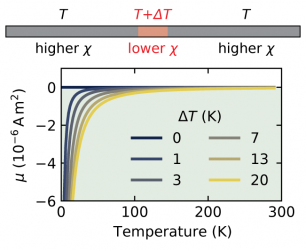 However, if the sample-holder material has a spatially varying magnetisation, unexpected signals can appear. In particular, we revealed that a diamagnetic-like signal can be detected around a region of the holder having a locally reduced magnetisation. This condition does not occur in typical experiments, and it is carefully controlled when designing sample holders.

Unexpected effects, however, can arise upon performing magnetic measurements of samples under the flow of electric current. Experiments with current flow are a rather new research field, and allow to investigate new material properties in non-equilibrium steady states. Due to the flowing current, the sample generates heat via the Joule effect, and can cause a localised temperature increase of the holder. If the holder magnetisation has a temperature dependence, a localised temperature increase can locally change its magnetisation. If the local change leads to a decreased magnetisation, a diamagnetic-like signal can arise from such region of the holder, which coincides with the position of the sample.

The steeper the temperature dependence of the holder magnetisation, the larger this “diamagnetic” signal will be. A strong increase in the magnetisation with lowering temperatures is rather common in materials that follow the Curie–Weiss law, such as glass epoxy. For this reason, the lower the system temperature, the stronger the “diamagnetic” signal. This effect is illustrated in the figure below, where we experimentally realised magnetisation measurements under localised heating by using an ordinary resistive heater. A “diamagnetic” signal, indicated by the magnetization μ becoming negative, was observed for a few mW of supplied power (left column). The signal becomes more pronounced at lower temperatures. We reproduced these experimental results also by using a numerical calculation (right column).

This paper constitutes an important milestone for performing accurate magnetic measurements under the flow of electric current, a promising direction for future research.