Welcome to My home page! I present my recent research activities and the list of my publications, etc.

I recieved "IOP trusted reviewer status" from IOP (without getting their training course).

Our paper on the uniaxial-strain control of nematic superconductivity, mainly contributed by our former Ph.D student Ivan Kostylev has been published in Nature Communications. This paper was selected in Editors' Highlights on condensed-matter physics, where only a few condensed-matter papers per month are selected as interesting papers. For more info, read explanation in our lab webpage.

A paper on the discovery of the new superconductor CaSb2 has been published in Physical Review Materials.

A paper on the Moessbauer spectroscopy on the antiperovskite oxide superconductor Sr3-xSnO has been published in Physical Review B.

Our discovery of the DC electric-current-induced diamagnetism in Ca3(Ru1-xTix)2O7 and its switching phenomena controlled by current is published in Physical Review Letters.

I'll be attending The 2019 Gordon Research Conference on Superconductivity to give an invited talk.

A review paper on nematic superconductivity has been published in MDPI Condensed Matter. It is an open access.

Our paper on specific-heat measurements of Sr2RuO4 "Specific-Heat Evidence of the First-Order Superconducting Transition in Sr2RuO4" is now published in the Letter Section of Journal of the Physical Society of Japan.

I am invited to International Conference on Strongly Correlated Electron Systems (SCES2014) (July 2014; Grenoble, France) as an Invited Speaker.

Our paper on Ag5Pb2O6 entitled "Transport properties of Ag5Pb2O6: A three-dimensional electron-gas-like system with low carrier density" is published in Physical Review B.

I will attend The International Conference on Strongly Correlated Electron Systems (SCES2013) (Aug. 5-9th, 2013; Tokyo Japan) and give a oral presentation on Sr2RuO4.

A paper on our discovery of the first order superconducting transition in Sr2RuO4 entitled "First-Order Superconducting Transition of Sr2RuO4" has been published in Physical Review Letters. This result is also presented in The Nikkan Kogyo Shimbun and Kyoto University Website

I am invited to an international conference on superconductors "International Conference on Materials and Mechanisms of Superconductivity (M2S 2012)" (July-Aug., 2012; Washington DC, USA) as an Invited Speaker

I am invited to an international conference on molecular conductors "International Conference on Science and Technology of Synthetic Metals 2012 (ICSM2012)" (July, 2012; Atlanta, USA) as an Invited Speaker.

I am invited to an international conference "International Conference on Topological Quantum Phenomena (TQP2012)" (May 2012; Nagoya, Japan) as an Invited Speaker

I am invited to an international conference on molecular conductors "The 9th International Symposium on Crystalline Organic Metals, Superconductors and Ferromagnets (ISCOM 2011)" as an Invited Speaker!!

I'll be attending American Physical Society March Meeting (Mar. 2011, the Dallas Convention Center) and presenting our results; The title of my talk is "Thermodynamic study of the superconducting gap structure of (TMTSF)2ClO4"

I will have a review talk on the superconductivity of (TMTSF)2X at the Autumn Meeting of the Physical Society of Japan. The talk is on 25th Sept (25pRB-2), and the title is: "Unconventional Superconductivity in the Quasi-One-Dimensional Conductor (TMTSF)2X")

I renewed the English webpage.

I wrote a review paper on the nematic superconductivity, in which the superconducting gap amplitude breaks the rotational symmetry of the underlying lattice. The paper is now published in MDPI Condensed Matter (Condens. Matter vol.4, article number 2, 2019) as a proceedings paper of the Erice Workshop 2018 "Majorana Fermions and Topological Materials Science". The paper contains fancy figures (produced using gnuplot, of course) as below. 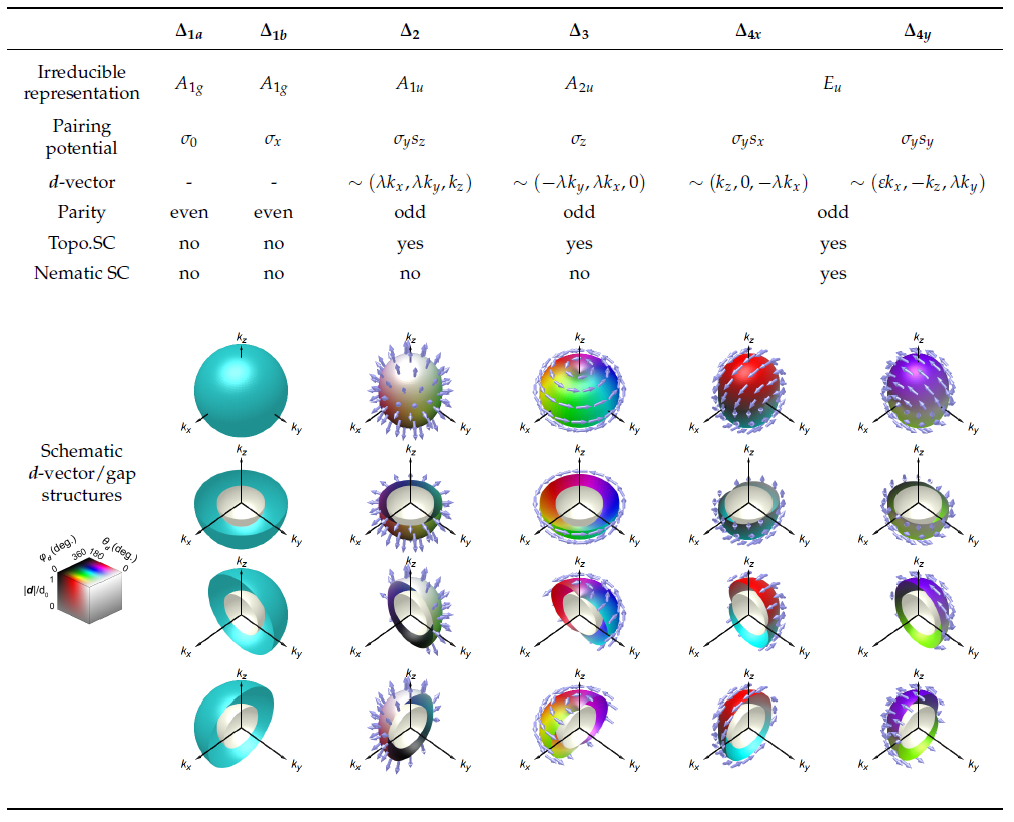 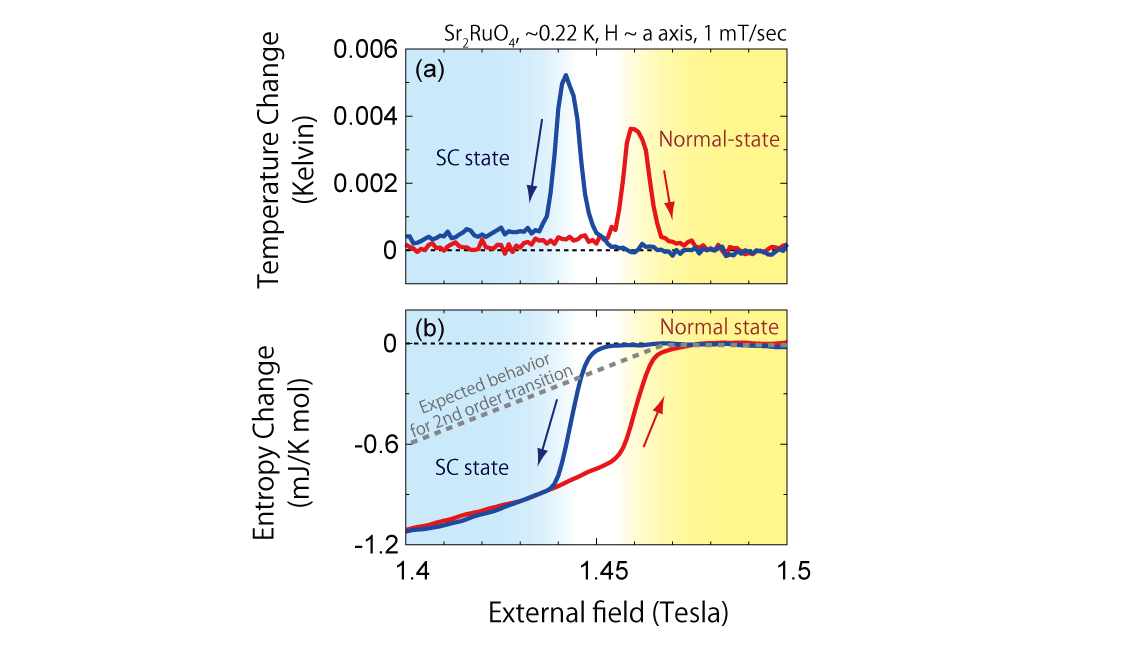 The structure of the superconducting gap, which is one of the most fundamental pieces of information of a superconductor, has been unresolved for more than 30 years in the case of the first-discovered organic superconductors: the TMTSF-based molecular conductors. Overcoming experimental difficulties, we succeeded in the first mapping of the positions of the zeros on the gap of (TMTSF)2ClO4 from our precise field-angle resolved calorimetory and in proposing possible gap structures. Generally speaking, the structure of the gap is closely related to the mechanism of superconductivity in a material. Thus, our mapping provides a new clue to unveil the mechanism of unconventional superconductivity in the TMTSF systems, and to investigate similarities to other superconductors such as high-transition-temperature copper oxides or iron pnictides. In addition, we determined the thermodynamic phase diagram of this material for the first time for all three principle field directions. This result proposes existence of two regions: a long-range ordered superconducting state in low magnetic fields and an interesting short-range ordered or fluctuating superconducting state in higher fields. This result is published in the Rapid Communication section of Physical Review B. read more...

We have demonstrated a complicated interplay of superconducting pair-breaking effects in the quasi-one-dimensional superconductor (TMTSF)2ClO4, depending on the applied magnetic field strength and direction. We also suggest that spacially modulated superconducting states (FFLO states) are realized in high fields. These results are published in Journal of the Physical Society of Japan. read more... 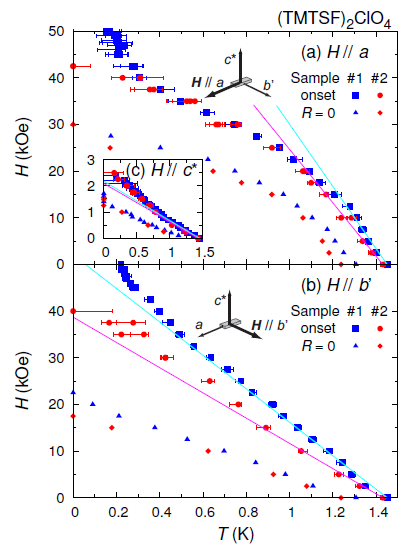 We discovered unusual anisotropy in the in-plane field-angle dependence of the onset temperature of superconductivity in the quasi-one-dimensional superconductor (TMTSF)2ClO4. We propose that this anisotropy results from a reduction of the effective dimensionality in the alectronic state driven by the applied magnetic field, and from a occurence of a spatially-modulated superconducting state (so-called FFLO state). The results are publised in Physical Review Letters. read more...